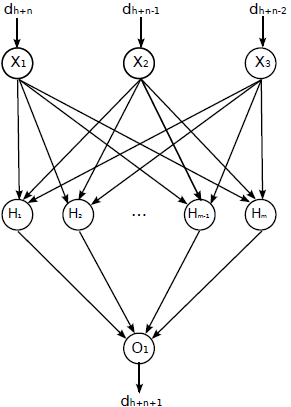 A method of predicting tree diameters of eucalyptus clones with Artificial neural networks Multiplied Perceptron (MLP) was presented in this work. The objective was to optimize the time and cost of carrying out the forest inventory process. The predictions made with the model used 3 diameters of the base of the tree and the other diameters were estimated one by one in a recursive way until reaching the minimum commercial diameter of 4 cm. The Smalian method was used to calculate the commercial volumes of the trees. MLP training was performed with only 10% of the total trees in the planted site and were tested with the remaining 90% of the total trees. To evaluate the performance of the model, the diameters were compared with the actual measured values. The proposed model was satisfactory in the tests performed, not presenting significant differences when compared to the diameters estimated with the actual values ​​of the trees.